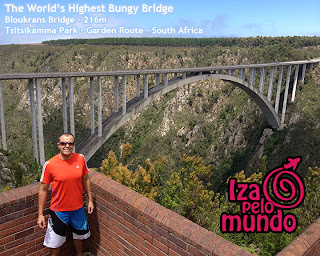 This slogan of Face Adrenalin  is strictly my point of view for a lifetime, but to be honest jumping from the highest bungy bridge didn’t scare me, or at least the fear was mixed with anxiety that was already flowing with adrenalin into my veins since first time in the morning, when I woke up with the ticket bought, paid and scheduled. 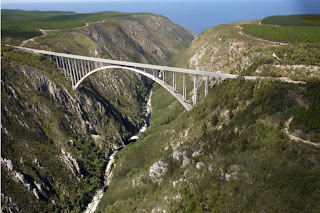 Thanks to “Iza Pelo Mundo” the most special spots in our trips were paid and scheduled before departure, to avoid unexpected things. But some boring unexpected thing got me worried since the first hour in that day. The sky was gray, foggy and although this was not a reason to abort the jump, it could spoil the great view of jumping from a huge bridge in a wonderful valley. Jumping into the fog would not bring so much adrenalin. 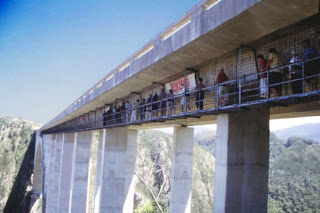 But the weather changed, the fog was gone and in the time of my jump everything was perfect. The walkway to the jump spot is already too radical for many people (including Iza), it’s a bridge-walk into something like a cage corridor, attached under the bridge, that´s why the access is controled and the reason why pleople that are not jumping must pay to got there. People go and come back in groups, so we have to wait until the scheduled time. 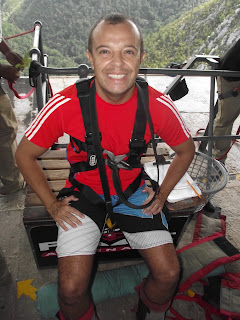 Everything starts when they weight   you and write your weight and your jump number in your hand. You dress a full body bouldrier and you wait walking around (it has a snack house with a big screen that shows what is happening in the jump spot), looking at the bridge, watching jumps, taking photos, and the adrenalin getting higher and higher.

In your time, a instructor comes to give the first instructions to the group, some jokes to relax and everybody goes into the cage-bridge-walk.
The jump spot is a party, loud music giving the rhythm, and you just watch close jump, after jump you watch a live and in the TV, because it´s impossible to look down. It has two ropes, when someone is being rescued the other one is being prepared for the next jump. 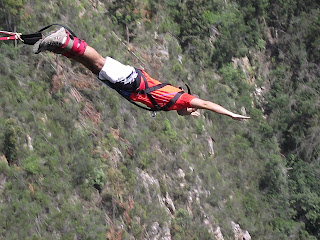 I was the third one in my group, I had a seat to be tied, the instructor gave some more instruction/information but I have to confess that I was not worried in knowing how many weight the rope can endure, I was just thinking in jumping. 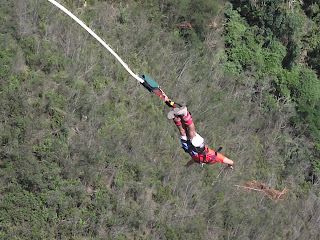 Tied, you give some small jumps through the edge and two instructor helps you, because if you lack courage they will give you a “hand”. I asked if I could jump and he said that I must jump as far as I could, and I just know that was like that:

Before I was curious to know how the recovery was done after you stay going up and down like in a io-io, now I know. 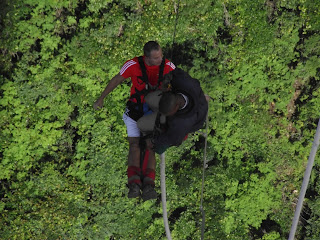